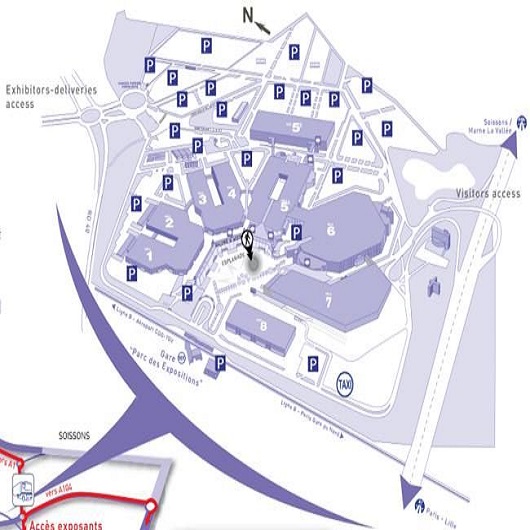 Villepinte Paris is the second-largest exhibition centre in France and one of the largest in the world. Regularly announced as "Parc des Expositions" on Paris's public transport network - it can be reached specifically via RER B. The huge convention centre is situated in Villepinte near Paris-Charles de Gaulle Airport. It is also only 30 minutes from Gare du Nord (Paris-Nord), the city's widely famous northern train terminus.

This convenience makes the Nord Villepinte Exhibition Centre fast and easy to reach from not only almost everywhere in Europe but around the world too.

The huge, relatively newly built centre is suitable for exhibitions and shows in every industry. With over 246 000 square metres of event space and eight gigantic halls, the centre plays host to a huge range of trade shows, exhibitions and events every year in its 115 hectares of land:

All4pack Paris, Europain, Eurostatory, SIAL, IPA and many others can regularly be found exhibiting at the Paris Nord Villepinte Exhibition Centre. They boast the centre's state-of-the-art facilities, the excellent transport links to the rest of the world as well as all of the attractions which nearby Paris has to offer as major selling points.

Paris has a truly stupendous array of hotels on offer. Not only are people visiting the Parc des Expositions in their hundreds of thousands every year, but millions of people visit France's capital to see the sights and experience the glamour of one of the world's most famous cities too.

This makes choosing between hotels near Paris Nord Villepinte Exhibition Centre a serious challenge. Luckily, RoomBites has the solution:

Quickly send us the details of your stay - including the number of rooms you want to book, times and budget as well as any other requirements you might have - and we will Bite your rooms at the perfect hotel.

Our accommodation experts handle all of the comparison  and negotiation work so you don't have to. Let us know what you need from your stay today.

By Rail
The main transport to Villepinte is RER B train, which connects most stops and Charles de Gaulle-Roissy. The trip takes about 30 minutes from the center of Paris; it runs every 7 minutes, from 7.00 to 20.00.