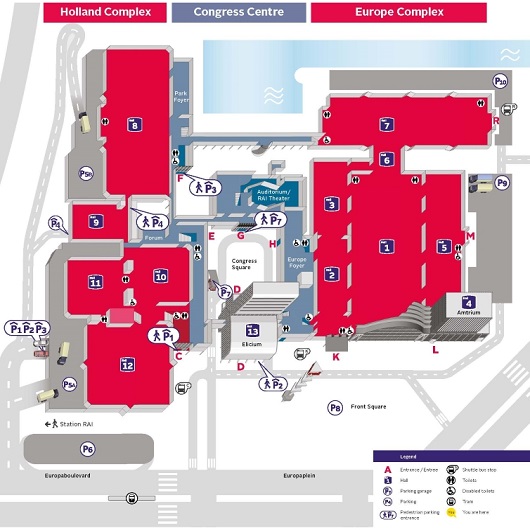 RAI Amsterdam Convention Centre is a huge complex, offering more than 112 000 square metres of event space in the heart of the Netherlands' most famous city.

There has been a RAI - Rijwiel en Automobiel Industrie - since 1900, and the name rests on an earlier group which supported the bicycle industry. This long tradition - paired with a dynamic, ultra-modern space - has kept the Amsterdam RAI Exhibition and Convention Centre at the forefront of Europe's trade show and exhibition locations for more than one hundred years.

The advanced modern centre welcomes somewhere around 2 million visitors each and every year. Its largest hall - the Europahal RAI - seats a staggering 13 000 people!

There are a total of 70 conference and meeting rooms, 2 auditoriums and 12 halls, the latter of which can be altered to accommodate the needs of individual shows. That is a very good thing as over  120 conferences and trade shows that take place at the RAI Center Amsterdam annually hail from a wide range of industries, with a variety of different requirements.

For the organisers and exhibitors of trade shows ranging from the extra small to the very large, the centre's modular design makes it the ideal choice.

There is  a huge number of hotels near RAI Amsterdam. There is also a large range of accommodation which is easily accessible from the centre, using Amsterdam's solid public transport options.

The easiest solution when you are attending or hosting an event here is to Bite a room:

Tell us what you and your team need from a hotel near Amsterdam RAI. We will handle all of the price comparison, availability checking and negotiation needed to get you the best value for money at the perfect hotel for your team.

You can concentrate on the important professional and commercial details of your visit to the RAI. All of the business trip accommodation planning will already have been taken care of.

By Rail
The travelling time from the main train station in Amsterdam to RAI is only 8 minutes by metro line 52. From Amstel Station RAI can be reached by taking metro 51 or Bus 62. Metro 50 operates between Amsterdam Sloterdijk and Gein.

By Plane
Amsterdam Airport Schiphol is located a mere 15 minute ride from RAI Amsterdam whether you travel by car, train, taxi or bus.