Koeln messe is a focal venue hosting over 50 trade shows every year. Its great contribution to the business is yet again proven with Koeln messe 3.0 project (Jan 2019)
Check Upcoming Events 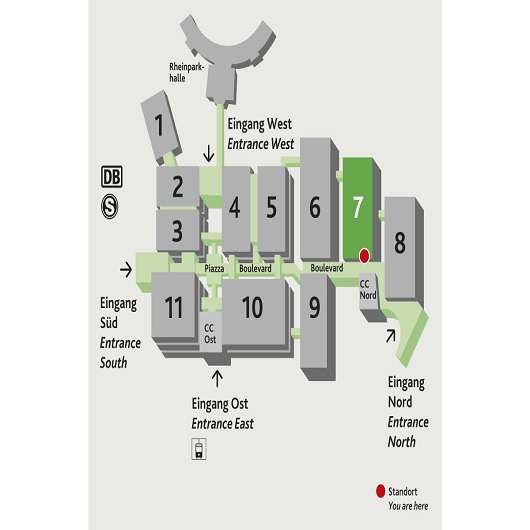 Koeln Messe lies in the centre of Europe's largest business region and in one of the most important commercial cities on the continent. Trade shows have been a part of the way of doing business in the city for over a century, with the first Cologne Trade Fair of the modern era  held in the city in 1924.

Built on one of the oldest traditions, the Messe in Cologne is one of the largest trade fair halls and conference centres in the world:

There is a simply stunning variety of rooms and halls here. You can find a luxury salon catering to just over 100 guests - or gigantic halls which cater to over 11 000. All of these indoor spaces are set on grounds that cover over 100 000 square metres and offer numerous other options for events to be held outside themselves.

What is more, the venue will reorganise rooms and halls so that they specifically cater to different events. It also offers services for stand construction and consulting on every aspect of attending or running an event at Köln Messe.

As Koeln Messe is situated in Cologne, Germany, it is very convenient to reach for almost any European or global business. Cologne-Bonn Airport is only a short trip away and the autobahn highway is very close to the centre if you are arriving by road. The Köln Messe Deutz Train Station is also almost directly adjacent. The fact that the station is named Deutz Messe after the event space should give you some indication of the venue's size and importance.

The venue has incredibly convenient transport links. This means that both the hotels near Koelnmesse and Cologne's broader range of accommodation are easily accessible if you are visiting or hosting an event here. As one of the most important cities in Europe, Cologne offers a dynamic range of accommodation options, from five-star luxury on downwards.

Send the details of your stay and your requirements to RoomBites and let us handle the selection of the best hotels near Köln Messe for you. There will be no need to compare prices, confirm availability or negotiate the best deal.

We take care of everything related to   your accommodation. So you can get on with handling the vital business-centric details of your stay.

By Car
GPS 50.947086, 6.982777, Messeplatz 1, Cologne, Germany
The exhibition center is directly accessible from the highway. You need to follow the green signs marked “Koelnmesse’’. There are about 14,500 parking spaces and free shuttle buses run from the car parks to the entrances.

By Rail
Due the central location of Koelnmesse, it can be reached easily and quickly. For the south entrance you need to use S-bahn Köln Messe/Deutz, S6, S11, S12, S13 or tram / subway 1 and 9. For the other 3 entrances you can take lines 3 or 4.

By Plane
High-speed ICE trains connect Köln Bonn Airport and Koelnmesse. Sbahn Line 19 can be used to reach the fairgrounds in less than 30 minutes.